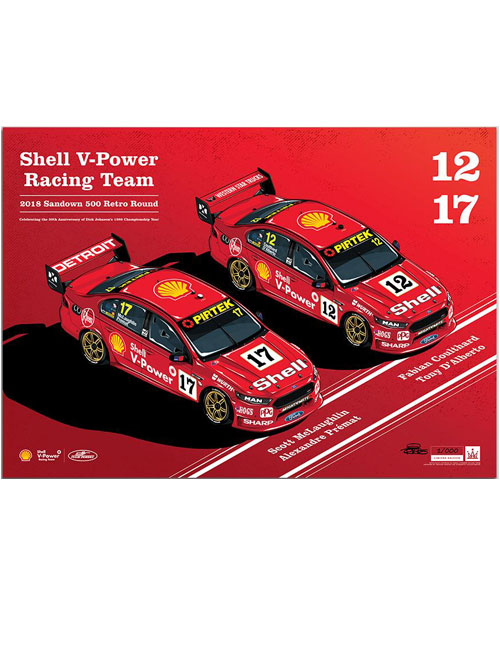 As a team with one of the richest histories in Australian motorsport, Shell V-Power Racing Team / DJR Team Penske will be celebrating a milestone moment from the past with their liveries at the 2018 Sandown 500 Retro Round.

Their #12 and #17 2018 Ford FGX Falcons will race featuring a special one-off retro themed livery based on Dick Johnson’s Shell Ultra-Hi Racing Ford Sierra RS500 which he drove to win the 1988 Australian Touring Car Championship – with 2018 marking the 30th Anniversary of the achievement.

The 1988 season was a particularly dominant one for Dick Johnson Racing, with Johnson and his then teammate John Bowe taking victory in eight of the nine rounds. It was Johnson’s fourth Australian Touring Car title, with Bowe finishing second in the points for a Shell 1-2.

“Those Sierras were the best Touring Cars on the planet, and we were completely and totally on top of our game,” said Johnson.

“Seeing that classic livery on these cars is very special and brings back many great memories. It’s hard to believe it’s been 30 years, but amazing to relive those fantastic times and see that livery back on track.”

Please Note: Concept artwork used, any updates required will be made prior to release