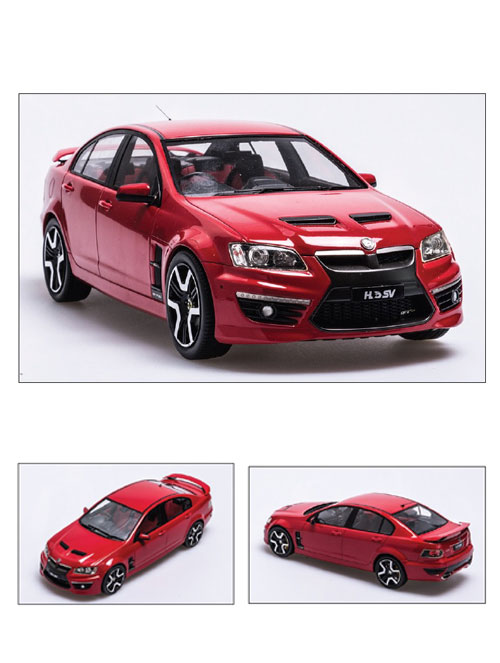 In stock (can be backordered)

Any Australian motoring enthusiast would be familiar with the HSV nameplate. Established in 1987, the official performance arm of Holden have been producing wild, spine tingling variants of Holden road cars for almost 30 years now. Perhaps one of the most recognisable HSV names to have ever been produced is the GTS. It is the full size performance sedan option in the range that in most cases was about as good as you could get when it comes to owning a HSV.

The E Series HSV range was introduced by HSV in 2006 after the launch of the new Holden VE Commodore range. It was a very popular suite of HSV’s which worked well in part due to the success and longevity of the road car range and the VE V8 Supercar program which eventually became the most successful model Commodore to race in the history of the series. The E Series 3 was the last version of the E Series range and was released in 2010 of which this replica is based.

The 1:18 Scale replica of this model is an exceptional collector’s piece. Produced in sealed body resin the first thing you notice upon inspection is its significant weight and quality of craftsmanship. The body lines are beautifully replicated on this model given the way it has been produced with the door gaps and joins between the panels looking as realistic as possible. The model includes a number of very nice features including the badge work, metal etched grille in the front bumper assembly along with the metal etched side vent, the hood scoops and the black and chrome wheels are presented extremely well.

Despite being a sealed body model, no shortcuts have been taken with replicating the interior of this model. Upon looking through the clear windows you can see a very high attention to detail right down to the seat trimmings, dashboard instrumentation and logos. You can even clearly see the iconic circular HSV lion and helmet logo on the head rests of the front seats such is the level of detail. Last but not least, the Sting Red colour scheme simply looks phenomenal and finishes the model superbly well.

The 1:18 Scale E3 GTS is a must have model for Holden and HSV fans alike.