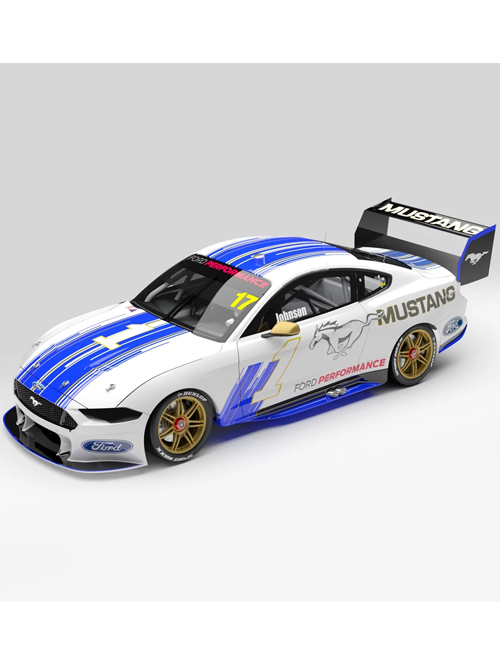 Everyone was excited to see how the new Ford Mustang GT Supercar would perform on debut at the 2019 Adelaide 500 but perhaps no-one more so than Dick Johnson because aside from being a team co-owner with two new Shell V-Power Mustang’s competing that weekend and all the nervous anticipation related to that, he was also getting back into the driver’s seat of a #17 Mustang Supercar for demonstration laps as part of the Ford Performance ‘Parade of Champions’ alongside Marcos Ambrose in a Mustang NASCAR and Scott McLaughlin in a Mustang road car.

In the lead up to the event, the 5 time Australian Touring Car Champion was enthusiastic and his usual humorous self about the prospect of jumping behind the wheel of a fully fledged Supercar once again; “When I was approached with the concept, the first question I asked was ‘what’s the lap record?’. But seriously, it’s been a long time since I’ve been behind the wheel of a full-spec Supercar, and to get the chance to drive the new Mustang is something I’m very much looking forward to,” said Johnson. “Scott and Fabian have been saying plenty of great things about the new car, so it’s going to be an honour and a privilege to once again hit the track in Adelaide, for the first time in nearly twenty years. Doing it alongside Marcos and Scott is just the icing on the cake.”

Come race weekend, the Ford icon was suitably impressed after cutting his first laps and couldn’t resist on comparing the old cars to the new. “These guys don’t know how lucky they are, they’ve got it pretty easy to be quite honest. The way the car feels and handles, it’s pretty hard to get a real gauge in a couple of laps. But boy oh boy, it has plenty of grunt, a lot more than what we had and certainly they stop extremely well. As far as kerbs and that, there’s no such thing. When you run over a kerb it’s like running over a pebble!”

Over his remarkable career, Johnson raced some of Ford’s most iconic race cars in Australia and experienced a tremendous list of achievements. He’s a legend of the sport, so there’s obviously little comparison to a competing in a fully fledged race in the prime of your career versus demonstration laps well into your racing retirement but it’s fair to say that Johnson’s experience at the 2019 Adelaide 500 would be fondly remembered by not only him, but his legion of fans who witnessed it.

And very few could deny, it’s always nice to see a Ford Supercar with the #17 and the name Johnson on it!