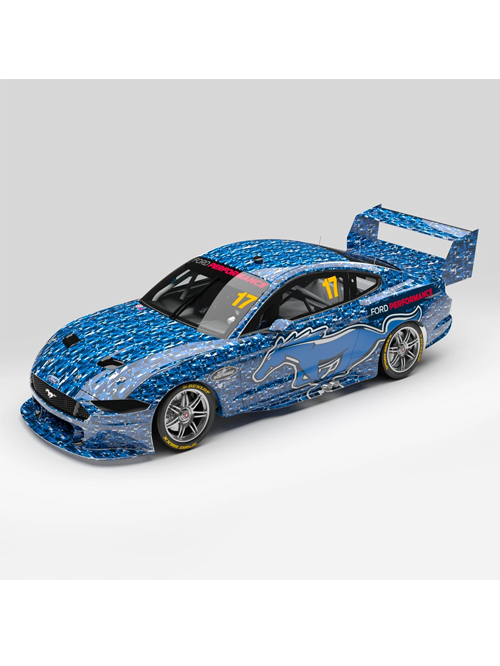 Everyone in Australian motorsport had eyes on Ipswich in November of 2018 as homologation team DJR Team Penske, in partnership with Ford Performance and Tickford Racing, wheeled out the newly developed Ford Mustang GT Supercar which was set to appear on track the following year to contest the 2019 Supercars Championship. Featuring a distinct camouflage livery that was specifically designed to confuse prying eyes and hide some of the Mustang’s distinct (but very legal) aero advantages and carrying the iconic orange #17, it was a memorable first outing for the car.

Both DJR Team Penske’s Shell V-Power Racing Team driver’s Scott McLaughlin and Fabian Coulthard took turns behind the wheel over the course of the day, cutting multiple laps and testing various different set ups. “First of all, the car looks awesome. It’s going to be so good to see it in Shell V-Power colours next year,” said McLaughlin. It’s a great start. It did everything we could expect of a brand-new race car, and the balance feels pretty close to our current package. Having now driven it, I’m massively excited for the 2019 season to begin.”

At the conclusion of the test, DJRTP reported the Mustang ran faultlessly and managing director Ryan Story said he could not have been happier with how the day unfolded. “To see Mustang on track for the first time is a great milestone, as we’ve been working on this project in earnest since November last year. It is a testament to everyone involved,” Story said. “It’s an encouraging start. The car looks fantastic, and both drivers reported that the car has plenty of promise. We couldn’t be more pleased with how things progressed today.”

Further testing was carried out at Phillip Island with the Mustang package later finalised and subsequently approved by Supercars to race in 2019. The rest, as they say, is history.

Despite designing a better car and having it approved by Supercars, the new Ford Mustang was subject to various modifications in the ongoing ‘parity’ saga of 2019. Ultimately though, in the hands of talented drivers, it didn’t matter and has been dominant since its debut, breaking records, winning back to back Manufacturers Championship’s for Ford, Drivers Championship’s for Scott McLaughlin, Teams Championship’s for DJR Team Penske / Shell V-Power Racing Team and a Bathurst 1000 crown to cap off the cars remarkable success to date.