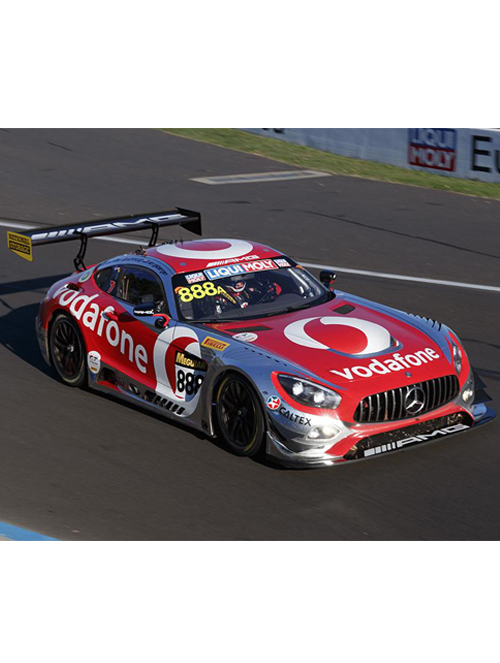 Available for pre order. ETA at announcement: 4th Quarter 2019
Please Note: Price and ETA are correct at listing. Both are subject to change without notice

Dream Team, Super Team, call it what you like; Triple Eight Race Engineering assembled an all-star driver lineup for its first tilt at the Liqui Moly Bathurst 12 Hour. A powerhouse when it came to the 1000-kilometre Supercars race, Roland Dane’s squad didn’t have to look far to fill the three slots in its driving roster.

Shane van Gisbergen, Jamie Whincup and Craig Lowndes had amassed between them 11 Bathurst 1000 wins, 11 Supercars Championships, and four Bathurst 12 Hour wins. To top it off, former team sponsor Vodafone came on board as primary sponsor of the #888 Mercedes AMG GT3, run in conjunction with Australian GT squad Scott Taylor Motorsport.

However, they were in for a tough weekend. A braking problem persisted throughout the weekend, and a lack of balance on new tyres meant the Vodafone Mercedes started race day from 19th. The #888 moved steadily up the leaderboard throughout Sunday, but its all-star drivers were having far from a fun time in the cockpit. Along with the car’s continuing brake issues, the Mercedes wasn’t initially running a driver cooling system on what proved a warm day on the Mountain.

The #888 was one of a handful of cars still on the lead lap as the finish neared, a late Safety Car prompting the team to pit for new tyres in the hope a podium might be in reach. Van Gisbergen charged from seventh up to fourth at the restart, but a podium finish eluded him by two tenths of a second. The effort took its toll, the Kiwi collapsing out of the car when it reached Parc Ferme.

“I had to use two feet (on the brakes) the whole stint and I just couldn’t push the pedal hard enough to stop,” he said. “I heard from Craig and Jamie how hot it was, so I prepared for the worst, but Kiwis aren’t made for the heat, so I battled.”

Available for pre order. ETA at announcement: 4th Quarter 2019
Please Note: Price and ETA are correct at listing. Both are subject to change without notice